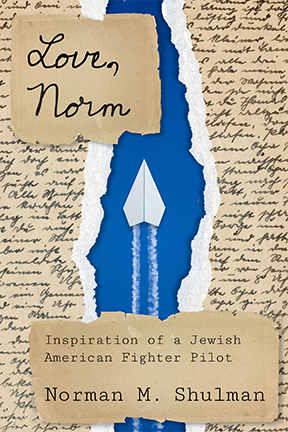 “I was not shocked when my stepson [Greg Levenson] decided to become a fighter pilot.” So begins Love, Norm—Greg’s and my story of Jewish military history as inspiration.

Greg had begun Undergraduate Pilot Training (UPT) at Vance Air Force Base in Enid, Oklahoma, when we had a conversation punctuated by his observation that he thought that he was the only Jew on a base of over 900 airmen. He wasn’t complaining but rather was bewildered, and an explanation was called for. To my surprise, an image instantly came to mind: a Star of David consisting of significant Jewish military figures dating back to the American Revolution up to the present day, with Greg’s name affixed at the summit. As a student of Jewish history, I was well aware of the tradition and legacy of Jewish military participation in whatever country the Diaspora had taken them. For example, in my own family, three uncles served with distinction, one earning a Bronze Star, during World War II.

Being aware of my family history made me sensitive to notions of negative perceptions of Jewish military service. So, when I saw the movie Gentleman’s Agreement, I reacted viscerally. The film is about a reporter played by Gregory Peck who passes himself off as a Jew in order to better understand what it was like to be Jewish in the 1940s, a period notorious for its anti-Semitism. The movie contains no fewer than six scenes dealing with anti-Semitism, the most offensive of which was the widely held belief that Jews served in strictly noncombatant roles. Only when Israel gained independence and mustered an aggressive stance against an existential threat did perceptions of Jewish passivity change. A clear historical line had been drawn in 1948 between American Jews and their counterparts in Israel.

With these things in mind, I decided to connect Greg to his Jewish foundations by writing him weekly letters (52 in total) that were attached to inspiring stories of Jewish military heroes. My goal was to reduce his sense of spiritual isolation and allow him to feel a part of an impressive history of military prowess.

I presented Greg with an international cast of characters who served in the world’s major conflicts so as to show him the full scope of Jewish contributions in defense of their countries. Jewish calmness and competence were never exemplified more than during what was arguably one of the most important engagements of World War II: the Battle of Britain. An exceptional example is that of RAF pilot Flight Lieutenant Robert Tuck , who was credited with shooting down no fewer than thirty German aircraft.

As I continued to research other Jewish military figures, I developed a second reason for the project. History is replete with examples of how Jews had to fight not only the enemy but also rampant pervasive anti-Semitism. The ugly stereotype of Jewish avoidance of military service and cowardice in harm’s way became aspects of this universal prejudice that still lives on today. Jewish disloyalty and lack of patriotism have been used repeatedly as reasons to justify anti-Semitic persecution and discrimination, which reached their apex with the Holocaust. The raison d’être for the correspondence went far beyond name-calling or a failure to make rank.

The letters worked, as proven by Greg’s success as a decorated F-16 combat pilot who protected Coalition Forces during Operation Iraqi Freedom in 2007. I wove my own story throughout the narrative, which provided an opportunity for him to learn more about the development of my own Jewish identity. My wish is that Love, Norm will serve as a reminder that we all have a place of belonging in spite of our differences. Love, Norm combines history, religion, culture, and family in order to challenge readers to contemplate and comprehend their own and their families’ place in history.

Norm Shulman’s relationship with his stepson Greg Levenson, always stable and warm, evolved when Greg decided to enlist in the Air Force at age 27. Cognizant of past anti-Semitic stereotypes persisting about Jewish participation in the military, Norm wanted to help prepare Greg to feel comfortable in his own identity. So, Norm decided to write letters connecting Greg to the many Jewish military heroes who had preceded him. From Judah Maccabee to fighter pilots from today’s recent history, these profiles in heroism brought Greg foundation and strength. Norm’s letters to Greg make up one core of Love, Norm; the other is Norm’s own multigenerational story of Jewish military heroes. As the son of a Jewish immigrant whose place in America was hard-won, Norm chronicles what it was like to feel his identity pulled in different directions and how to hold fast to it nonetheless. Love, Norm is a retelling of profiles of famous Jewish fighters from across history and the singular story of how one man found pieces in his own past to preserve his Jewish identity. Together, empathetically channeled through heartfelt letters and remembrances, Love, Norm shares a collected wisdom with the next generation.