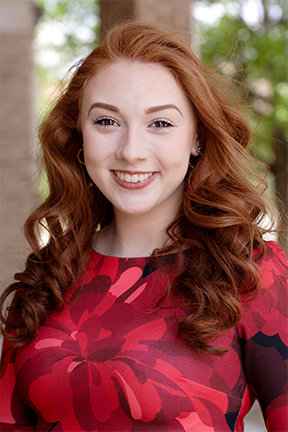 At Texas Tech University Press, we have undergraduate student interns and graduate student assistants. We wanted to give them a chance to introduce themselves and to talk about their work at the Press.

Can you give us a few basics about yourself? Standard introductory stuff: name, year in school, major, interests, future plans?

My name is Grace Gandy, and I am a senior-level English major set to graduate this May 2022 from Texas Tech University. I love all things reading and writing, which is why I am currently pursuing a career as an editor at a book publishing company. In my free time, I enjoy photography, spending time with my Shetland Sheepdog, Miley, volunteering at Friends of the Lubbock Library sorting donated books, and exploring all that Texas has to offer.

What drew you to spend some time learning about publishing?

Since I have always heard about and researched commercial publishing companies, I was curious to get a feel for what a university press such as TTUP entails. Being a Texas Tech University student as well, TTUP was the perfect opportunity.

What work did you do for the Press? What stuck with you?

I worked alongside Toluwani [Intern] and Travis [Acquisitions] to create a Publicity Guide for the Press to distribute to future authors who are interested in boosting the promotion of their publication in order to reach wider audiences and maintain active engagement with the public. During the process, I researched other university presses and used my previous knowledge of social media strategies to compile a list of constructive methods and procedures for creating media content and executing the posting of that content on platforms such as blogs, Twitter, and Instagram. I am also now working individually with a specific TTUP author in order to help her promote her book. Being the first real collaborative experience with an official published writer, I am beyond ecstatic to finally be getting to experience some real work in the publishing realm. It is so refreshing to be able to use my passion and skills that I gained throughout my education to aid someone so kind and enthusiastic about learning more about the process and distribution that goes into the publicity of a book publication.

As part of the internship, you sat in on a bunch of all-staff meetings where we did plenty of very basic publishing stuff—argued about titles and discussed tricky proofreads and fiddly contract negotiations. You saw a lot! I wonder if anything struck you as particularly weird or interesting.

I think probably the scale of TTUP was what struck me as most interesting. I had a notion going into working with the Press, even knowing of work they published, that given its university-specific name, it was probably a company that dealt primarily with Texas audiences. While there is a great deal of Texan influence, while listening in on meetings throughout the semester, I really got a feel for just how broad their external reach actually is. For example, sometimes I would hear about how a certain book—such as a leather-bound or of a fancier bind—needed to be produced outside of the country and then had to be shipped to us from overseas. Also, just the fact that our team was working with authors from various parts around the world and not just here in the US was extraordinary and eye-opening.

I’m not going to ask, “What’s your favorite book?” because that question drives me insane. But what’s something that you read that stuck with you? Could be a meaty book you read for class or a favorite childhood book.

A recent book that I read that particularly stuck out to me was the 1988 novel Libra by Don DeLillo. It is a fictionalized envisioning of the life of Lee Harvey Oswald leading up to the assassination of John F. Kennedy that plays with the government/CIA conspiracies that followed the historical event. The blend of fact and fiction alongside the varying character points of view was so intriguing and captivating that I found myself researching the real-life truth of what happened, which led me down a fun rabbit hole of exploration.