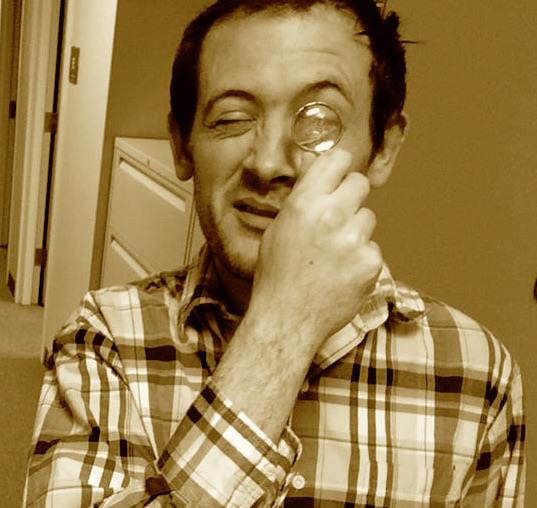 With the Iron Horse Prize submission window coming up on the horizon, we sat down to talk with the first winner, Joe Baumann. You can read more about the prize here.

Joe, in many instances these lovely stories foreground the emotionality of men. I wonder what it was like for you to explore that bandwidth. What tensions were especially interesting to you? What conflicts? What personalities?

I’ve been asked before to try to distill my writing interests and approaches into a few words, and I think I’ve settled on “surreal queer discontent.” So I hope that kind of applies to this question. I’m often thinking about what it is that causes people to feel discontent, especially and often when they seem to be in circumstances where they shouldn’t feel that way. Usually, the conflicts I’m drawn to are less external and obvious/loud (“my significant other is cheating on me” or “someone close to me has died”), although sometimes those things are present in my work. I’m interested in people—often men—who are experiencing new and unexpected (for them at least) emotional spaces, and I like to wrestle with what they do about being in those unfamiliar waters.

I wonder how the queerness of many of your characters relates to this. Do you see queer fiction as a particular enterprise or merely a happenstance of the stories you want to tell?

Queerness, as I mentioned above, is something that I definitely consciously integrate into my work, although these days I mostly view it as what I call a “standard backdrop” in the stories I write; while I think stories that are about discovering queerness and centering it are important, they’re not as much what I often write anymore. By that I mean that characters being queer is now often simply a part of who they are, not the central thrust of the story. It’s part of an attempt to normalize queerness in characters and literature—that is, no one seems to bat an eye when characters are straight (that part of them doesn’t need deep consideration, explanation, or highlighting), so why not have things be the same with queer characters?

I guess this line of questioning is also about your starting points in writing. Do you have people in your head first? Situations? Some language you’re drawn to?

Although there are exceptions, I usually actually begin with a few things: I often have a first sentence (or what starts as a first sentence but sometimes doesn’t stay the first sentence) that clarifies a premise or launching-off point for a story. Then, I also like to have a title—at least a working title that shapes the story’s focus or helps me think about what I want it to be thematically. I often then start playing around, simply writing what comes to mind until something clicks to make me see how the pieces I’m working with fit together.

Would you mind if I pivoted to more business-y type questions? You’ve published a great many of these stories in a variety of literary magazines and journals. The publishing process is, shall we say, frequently a dispiriting one. So this is an “advice to others” question. How did you seek out publishers? How did you meet with discouragement and encouragement?

To that last point, I tell myself that I’m just like every other writer in that rejection is the name of the game, and that it’s not necessarily a matter of work being good or bad but finding its right reader/editor that it will click with. Every writer has had their work rejected over and over—in fact, at least one of the stories in this collection has been rejected fifteen times, and yet here it is, included in an award-winning collection! I think you just have to let rejection roll off your back, but then you bask in the successes, because for every story that gets a space in a magazine, or book that gets a spot in a catalog, there are so many others—and so many quite deserving and good—that don’t.

In terms of finding publishers, I use the tools out there to make a list of magazines and publishers I think might like my work. I’m a big fan of NewPages, as well as the blog work of Erica Verrillo and Erika Dreifus. There are so many organizations and magazines that have lists of places to submit, and it’s really just a matter of constantly keeping a lookout and not being afraid to send your work out into the world.

Finally, as we’re a press with a director (and staff!) highly committed to this—what do you like about the form of the short story? It’s a pretty tricky thing in the modern literary marketplace. Most agents won’t rep them, most publishers aren’t interested. It’s a shame. Can you give us a broadside about the joys of the genre?

I have always adored the short story form. I think the fact that stories are digestible in a single sitting (although I guess some people can sit down and read a novel cover to cover without stopping; I’m not one of them) is what makes them attractive to me. I love the challenge of compressing a significant arc into a relatively small space and making everything matter in a way that requires more intensity and consistency than in a novel, where writers have a little more room to wander and be expansive. I think more people would read and love short story collections if only more presses and agents would champion them—look at what’s happened with some of the recent winners of the Pulitzer and National Book Award, like Adam Johnson (Fortune Smiles), Jhumpa Lahiri (Interpreter of Maladies), and Phil Klay (Redeployment). I think it would take just a few brave folks to really tip the short story collection into major interest. And I’m so glad that TTU Press is doing what they can!