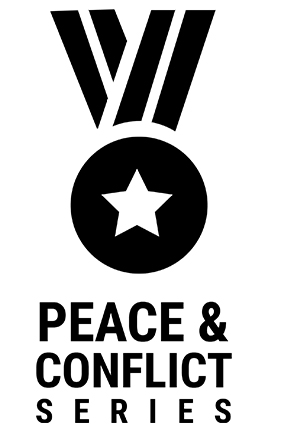 Throughout this 50th anniversary year, we’ve been doing a great deal of looking ahead at new and future initiatives. We thought it might be a good time to look back on some of our signature accomplishments, longest–running series, and best-loved books. So we’ve turned to our longest-tenured employee, sales and marketing manager John Brock, to dole out some institutional history, starting with our flagship book series and continuing with our fastest growing series.

The Peace and Conflict Series published by TTUP features books for scholarly and general audiences that enhance and expand critical research, creative scholarship, and practical education in the fields of war and society, global peacemaking, conflict resolution, and society’s response to such efforts. Ron Milam, the series editor, is an associate professor of History, a Fulbright Scholar to the Socialist Republic of Vietnam, and the founding faculty advisor to the Veterans’ Association at Texas Tech University. Dr. Milam is also a combat veteran of the Vietnam War and in 2015 was inducted into the Officer Candidate School (OCS) Hall of Fame at the National Infantry Museum at Fort Benning, Georgia.

Published in October 2019, Crooked Bamboo: A Memoir from Inside the Diem Regime is a political memoir centered on Nguyen Thai’s insider account of South Vietnam’s Ngo Dinh Diem regime. Thai was a close personal aide of Diem as well as Director General of Vietnam Press, giving him significant access to Diem and other Ngo family members.

Although the Diem era is the focus of the memoir, Nguyen Thai’s post-1963 career as a government official, businessman, and confidant of several key South Vietnamese figures sheds light on the aftermath of the Diem regime and the dilemmas of South Vietnam’s anti-communist elite throughout the Vietnam War. Thai’s attempts to help bring the war to a negotiated end and his experiences as one of the first former South Vietnamese officials to return to Communist Vietnam also offer important reflections on the meaning of the war and its aftermath.

In fall 2020, TTUP published Inette Miller’s Girls Don’t: A Woman’s War in Vietnam, a memoir of a war correspondent who follows her husband into the Vietnam War. There are obstacles for the young newlywed: all wives of US military are prohibited in-country. With the aid of her newspaper’s editor, Miller finagles a one-month work visa and becomes a war reporter. Her newspaper cannot afford life insurance beyond that. After thirty days, she is on her own.

As one of the rare women war correspondents in Vietnam and the only one also married to an Army soldier, Miller’s experience was pathbreaking. Girls Don’t shines a light on the conflicting motives that drive an ambitious woman of that era and illustrates the schizophrenic struggle between the forces of powerful feminist ideology and the contrarian forces of the world as it was. This is a war story, a love story, and an open-hearted confessional within the burgeoning women’s movement, chronicling its demands and its rewards.

Also published in fall 2020, Rain in Our Hearts: Alpha Company in the Vietnam War by James Allen Logue and Gary D. Ford takes readers through words and pictures into Alpha Company, 4th Battalion, 31st Infantry, 196th LIB, Americal Division in 1969–1970. Jim Logue, a professional photographer, was drafted and served as an infantryman; he also carried a camera. His camera records the individual experiences and daily lives of the men who fought the war.

Accompanying Logue’s over 100 photographs is the narrative written by Gary D. Ford. Wanting to reconstruct the story of Alpha Company during the time in which Logue served, Ford and Logue trekked across America to meet with and interview every surviving member whom they could locate and contact. Each chapter of Rain in Our Hearts focuses on the viewpoint and life of one or a few members of Alpha Company, including aspects of life before and after Vietnam. The story of the company’s movements and missions over the year unfold as readers are introduced to one soldier at a time. Taken together, Rain in Our Hearts offers readers a window into the words and sights of Alpha Company’s Vietnam War.

Texas Tech University Press is scheduled to publish the next two books in the Peace and Conflict Series in summer 2021. Admirals Under Fire: The US Navy and the Vietnam War by Edward J. Marolda is the story of how America’s top naval leaders handled the major challenges of the Vietnam War.

The Vietnam War and its aftermath sorely tested the professional skill of four-star admirals Harry D. Felt, Ulysses S. Grant Sharp, Thomas H. Moorer, Elmo R. Zumwalt Jr., and James L. Holloway III. Unlike their World War II predecessors, these equally battle-tested leaders had to cope with a flawed American understanding of US and Vietnamese Communist strengths and weaknesses, distrustful and ill-focused Washington leaders, an increasingly discontented American populace, and an ultimately failing war effort. Like millions of other Americans, these five admirals had to come to terms with America’s first lost war and what that loss meant for the future of the nation and the US armed forces.

Based on prodigious research into many formerly classified sources, Marolda relates in dramatic detail how America’s top naval leaders tackled their responsibilities, their successes, and their failures. This is a story of dedication to duty, professionalism, and service by America’s top admirals during a time of great national and international adversity.

The Air War in Vietnam by Michael E. Weaver is a deep dive into the effectiveness of air power during the Vietnam War, offering particular evaluation of the extent to which air operations fulfilled national policy objectives. Built from exhaustive research into previously classified and little-known archival sources, Weaver insightfully blends new sources with material from the State Department’s Foreign Relations of the United States Series.

While American air forces completed most of their air campaigns successfully on the tactical, operational, and strategic levels, what resulted was not a failure in air power but a failure in the waging of war as a whole. The Air War in Vietnam tackles controversies and unearths new evidence, rendering verdicts both critical and positive, arguing that war, however it is waged, is ultimately effective only when it achieves a country’s policy objectives.