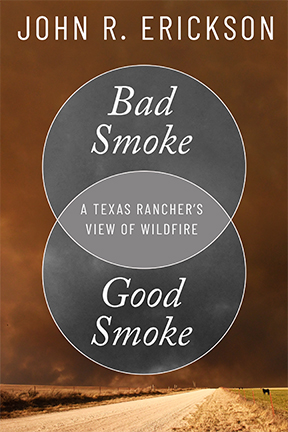 Most of you will know him as the author of the Hank the Cowdog book series, but John Erickson is also a rancher and memoirist. His newest book, Bad Smoke, Good Smoke, documents a fire that decimated his ranch up in the Texas Panhandle. The book deliberates on our relationship with wildfire in general and its role in land management. In honor of the book’s release, Travis and John had a quick conversation about fire and life on the ranch. Bad Smoke, Good Smoke is available now!

TS: Well, I suppose I should start here. Since you’ve written this fire book, you’ve rebuilt your ranch. Is everything and everyone settled back in? Did you at any moment consider packing up your rural idylls for a life in town that’s a little less subject to the elements?

JRE: Heck, no. Kris and I love this rough old country, and it’s in our blood. We belong out here with the coyotes and buzzards, for better or worse.

It took us thirty-nine months to rebuild the house we lost in the 2017 fire. It was a major effort, especially for Kris, but we’re glad to be back in our place. The new house is a lot more fireproof than the old one and our canyon is less flammable now because we lost thousands of juniper and cedar trees in the fire. Still, every March, we’ll be edgy about fires. It has become a part of living in prairie country.

Going through a fire of that magnitude is not something a sane person would ever want to do, but adversity has a way of shaping us—for the better, if we allow it.

TS: You’ve written about fire in several different capacities now. You’ve been a firsthand documenter. You’ve been a scientific researcher. And I believe Hank has encountered the subject as well. Has your relationship with fire changed significantly as you’ve written and thought about it?

JRE: As I say in the book, fire was not a vivid memory in my family, which spans five generations on the South Plains and Panhandle. My mother and her family talked about droughts and blizzards and tornadoes, but not about wildfires. Something has changed in our relationship with the prairie environment, and we can’t avoid thinking about and planning for large, destructive fires. Everyone in my family is giving a lot of thought to fires, and I think that is true of people throughout our region.

JRE: I devoted the last four chapters of the book to these questions and drew on the research of scholars who have spent their careers studying the causes and effects of catastrophic fire events. They all agree on the major points.

We are seeing changes in weather patterns and maybe even a change in climate. It might be the kind of natural fluctuations found in the archeological record or it might be the result of recent human activity. I don’t know, but in certain parts of the country (California, Colorado, and the Southern Plains) it has produced fires of a magnitude that we haven’t seen in recent memory.

We’re learning that our civilization is extremely vulnerable to fire, more than we ever dreamed. When things are wet and green, nobody thinks about it. When the rain stops and the wind howls, we realize that we’re not running the show anymore—if we ever were. We live in houses that can burn, whole towns that can burn.

Part of the problem is that we have more people now and our way of life is built around the use of energy. Energy is fire under control: motors, welders, and transmission lines that carry electricity. We and our gadgets create sparks every day. Sometimes it doesn’t matter, but sometimes it does.

Fire is part of nature’s plan, but it hasn’t been part of ours. We’ve been pretty clever at manipulating natural forces and patterns, but we’re going to have to give this one some serious thought.

TS: You’ve become something of a controlled burning advocate—a very old practice. Can you give us a short overview of this practice and its benefits? Also, you’ve got some educational events about this topic coming up; can you offer up any information on this?

JRE: I’m just a rancher who got caught in the path of a huge fire and was forced to think about my relationship to fire. As I see it, the theory behind prescribed burning is pretty simple:

Having said that, I confess that I haven’t used it on my own property. We’re in rough canyon country north of the Canadian River, much of it not accessible to firefighting equipment, and those canyons do weird things to wind currents. I’m scared to death of fire and only slightly less terrified about lawsuits that might come out of a burn gone bad.

I’m not ready to drop a match in my pastures—and I think most of my neighbors feel the same way—but that is likely to change. Prescribed burning is an idea whose time is either here or getting close. We have to make peace with a force as fundamental and powerful as fire.

On Friday, July 30, at 4 p.m., I will participate in the Prescribed Fire Exhibit Opening and Panel Discussion at the National Ranching Heritage Center in Lubbock, and I’ll be signing copies of Bad Smoke, Good Smoke. The following day, Saturday, July 31, I will be at the NRHC again, doing Hank the Cowdog presentations at 10:30 a.m. and 12:30 p.m. I’ll be signing books there, too.