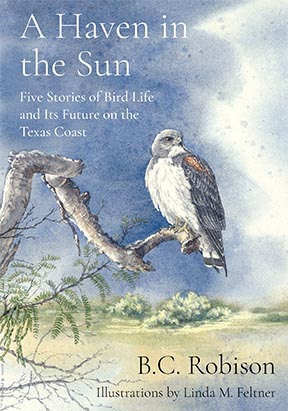 For the first time in over 100 years, whooping cranes were spotted nesting in Texas. Viewing this hopeful sign that the endangered species might be beginning to replenish itself, many Texas coastal birders have been making the pilgrimage to the nesting grounds, which are about an hour north of the Aransas Refuge. Among the pilgrims was our own B.C. Robison.

Robison’s A Haven in the Sun has a whole chapter devoted to the story of whooping cranes on the Texas coast. Interwoven with the history is a fictional story of a young whooping crane family making their long migratory journey. Read on below to learn a little bit more about the life of Regina, Buff, and Sundown.

It had been a good summer, finally, for the young Whooping Crane family of the Sass River. For the three years that they had been mates, Buff, the male, and Regina, the female, had nested each spring in the wetlands that embrace this narrow tributary of the Little Buffalo River, in the Northwest Territories portion of Wood Buffalo National Park. But each year, they had failed to raise a chick.

Their first attempt at nesting, when Buff and Regina were both five years old, resulted in two infertile eggs. The following year two chicks hatched, the usual two days apart. But while they were still confined to the nest a hailstorm struck the area and both chicks perished. A year later, two chicks again hatched, but the older chick pecked his nesting mate to death in the act of siblicide that is common in the Whooping Crane.

It had been very dry in the park that third summer. With water levels low throughout the wetland ponds, the crane family had to wander farther afield to find food, having to get close to one of the dense, green, tree-lined ridges that meander among the ponds. As the parents were foraging one afternoon with the surviving juvenile, a lynx darted out from the tamarack and attacked the youngster. Buff and Regina both lunged at the predator, pecking at him frantically, trumpeting their alarm calls. But it was too late; the young crane was dead. Buff and Regina quickly flew away to safety.

But this summer had been different. Once again, Buff and Regina had returned together to the park in mid-April from their winter home on the Aransas National Wildlife Refuge, on the central coast of Texas. They had mated near Meadow Lake, in Saskatchewan, toward the end of spring migration back to the park. Soon after their arrival Buff selected a nest site in a pond near their previous nesting locations, several miles from the nearest neighboring crane, on the north bank of the Sass River. Their parents had fledged more than a decade earlier in this same region.

Now, as a breeding pair, they had returned each year to raise their own young within the roughly two hundred square miles of forest and ponds lying between the Sass River and, twelve miles to the north, the Klewi River. Their companion cranes were nesting throughout the northeast corner of Wood Buffalo National Park, including north of the park boundary, but they mostly used the Sass–Klewi wetlands, where the nesting ponds (generally only an acre or two and rimmed with bulrush, cattail, and sedge) are crowded edge-to-edge by the thousands, like water lilies on an East Texas lake. Their pale green waters spring from the nearby Caribou Mountains, filling the shallow basins through the cracked bedrock. From this rare landscape comes the world’s only self-sustaining wild flock of migrating Whooping Cranes.

Buff and Regina soon set about building their nest — half the size of a dining-room table — in the center of a bulrush island set within a shallow, acre-sized pond. Nesting conditions were good: Water levels in the ponds were not too deep from heavy snowmelt and not diminished from drought. Summer fires, common in the boreal forest, had spared their nesting area.

Regina laid two eggs and the month-long incubation passed without incident, with each parent spending hours at a time, all day and night, atop the nest. As the time of hatching approached, Regina would spend more time on it than would Buff. He would stand watchfully nearby, taking over the nest several times a day to allow Regina to feed. The four-inch-long beige eggs hatched in early June, two days apart, and two wet but soon-to-be-fluffy chicks tumbled out, each the color of a dusty pumpkin.

The first chick, Sundown, was the larger of the two and ate more robustly than did his sibling; the second chick was smaller and weaker, lacking the two extra days of growth that Sundown had been given. Late one afternoon, a cold front — not uncommon in the erratic summer weather of sub-arctic Canada — blew across the region. The following morning, many of the crane nests throughout the region suddenly held only one live chick, rather than two. The four-day-old Sundown survived, but the second chick did not.

Sundown grew quickly as his parents brought him food, and by one week of age he was strong enough to leave the nest and walk and swim. He followed his foraging parents closely, awkwardly at first but with increasing strength and height each passing day. Buff and Regina watched over him as they walked through the bogs and marshes, slowly lifting their long black legs to move about as they sought frogs, small fish, berries, and insect larvae, all the while keeping a wary eye on the forested ridges that meandered among the ponds for a lurking bear or wolf. In moments of danger, Regina would lift a wing and Sundown would huddle under it. As the danger passed, he would emerge and walk about again. Sundown’s parents fed him throughout the day, giving him water beetles and fat dragonfly larvae; they would feed him for almost a year, throughout fall migration and the winter in Texas, up to the time he would start living independently the following spring.

The three cranes wandered every day along the edges of ponds in search of food, leaving a visible trail of tracks in the spongy organic muck that formed the base of each pond. After the family left the nest, they never returned to it. After each day’s foraging, they roosted for the night in the shallow pond where they had ended their daily efforts. Food had been abundant, and all three cranes were in good trim.

By early September, Sundown, now in the streaked, white-and-rusty-brown plumage of the juvenile, was almost as tall as his nearly five-foot parents. Most important, he was now capable of sustained, high-altitude flight, for the time to migrate to Texas was drawing near. Buff and Regina lingered in the area to feed Sundown a while longer, availing themselves of the abundant food, but soon the autumn weather would begin to press upon them. Daylight, which by late June in north-central Canada extended almost nineteen hours a day, was daily growing shorter. The weather was quickly turning colder, and the land-hardening pall of winter would soon arrive. By the end of October all the remaining cranes would be gone, finally driven out by the harsh weather.

A long journey awaited the Sass River family; Wood Buffalo National Park is as far from the Texas Coast as London is from Cairo. And although migration is the briefest phase of a Whooping Crane’s annual cycle, serious hazards lay in the birds’ path. Unreliable food supplies, the vagaries of the weather, unfamiliar stopover terrain, collisions with power lines, and ignorant, careless hunters all bedevil the migrating Whooping Crane; not every one of the tall, stately white birds nesting throughout the park would survive. The cranes would also need the forbearance of property owners, since many of the roosting and feeding sites they would use on the migration corridor were privately owned.

One mid-morning in the first week of October, a strong north wind arose; a light snow had fallen the day before, but the morning sky was bright and clear. The sun was warming the landscape and thermals began to rise. The crane family braced itself and stood still for several minutes, gazing up at the sky. Then, following their instincts inherited from millennia of ancestors, they lifted off on their seven-foot wings, flap-flying briefly before beginning a slow rising spiral, first Buff, then Regina, then Sundown, all circling slowly as they ascended to around a thousand feet. Then, one by one, they peeled off and, in close V-formation, headed south. Their great journey across Alberta, Saskatchewan, Montana, the Dakotas, Nebraska, Kansas, Oklahoma, and Texas had begun.