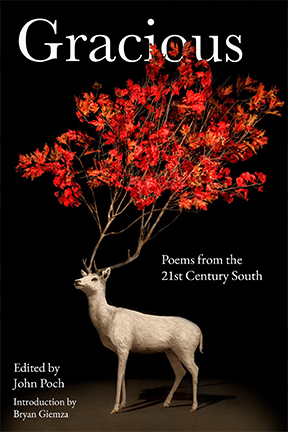 The new anthology of southern poetry from TTUP is called Gracious. To celebrate its release, our acquisitions editor, Travis, sat down to talk with Gracious’s editor John Poch (@jpoch) about the nature of anthology-making and southern poetry.

So, John, what’s the South to you?

I write about it pretty extensively in the prologue, so readers should take a look at that. But if I were to define it more briefly, I’d have to say that what we understand to be the South is informed by what we know as “the slave states.” It’s the culture that springs out of this, and the geography that shaped and shapes it. Most Southerners think Texas is Western, but it’s not Western like Arizona or New Mexico. Maybe El Paso is, but the rest of Texas is much more like the South in its culture and history. I grew up in Georgia, but I’ve lived longer in Texas than anywhere else. This is where I get my perspective.

Talk a little bit about the challenges inherent to anthology-making. How did you create parameters of what to include? What were your cut-off points? Who got left out that will make everyone mad?

I had envisioned 75 as a solid number of poets for the length of this kind of book (2 poems each), but in the end, I got permission to add 10 more poets. Since there was a delay in publication, a few excellent young poets who finally published books made it in under the wire. There are dozens of poets who were left out simply because I thought that their poems weren’t as good as the poems I’d already curated. Many of them are more well-known or considered “hot,” but their poems just weren’t better to me. Believe me, I’ve been left out of a LOT of anthologies, so I know the feeling. “How could the editor have missed me?” one thinks. It definitely wasn’t through neglect. I read probably 500–600 books, many of them several times, in order to make my choices. Sometimes people are popular poets not for what they’ve written but for their own personalities or their subject matter. As you can see from the poems in the anthology, I’m interested in dynamic imagery, strong lines, beautiful grammar, and surprising metaphor, among other things. I’m not going to mention names. I did leave myself out (anybody can look me up if they want). Maybe there’s some gracious-ness in that?

One of the things I like about Gracious is the mix of newer names alongside well-known poets. Poetry can be a bit insular and a bit hard to stay current with. Where does one find new, exciting southern poetry these days?

Unless you’re taking a college course in poetry (or teaching one), you’re probably not reading poetry. Or you’re reading dead poets, probably Romantic or dull verse. Two of the best American poetry journals are edited by Southern poets. Adam Vines (along with Greg Fraser) edits Birmingham Poetry Review, and George David Clark edits 32 Poems magazine. I think you’ll find a lot of the exciting new southern poets in their pages. Many of the poets in the pages of Gracious are teaching at universities and colleges in the South. Look for their up-and-coming students who learn from their amazing teachers.

The anthology was finalized last summer in the wake of the George Floyd protests. I’ve been thinking a lot about southern poetry as something that tears down monuments. Or perhaps creates new ones. Is there some coherent southernness that emerges from this collection? Should there be?

This anthology is a lot more about race than most of the previous Southern poetry anthologies. No doubt. It’s undeniable that the tensions of racial divisions are problematic and even mysterious, and it’s something that sometimes only poets can get at successfully. Politicians don’t seem to be able to find very good words for our experiences in this realm. I made a conscious effort to include poems that confronted racial strife, but then I also made a conscious effort to include poems that talk about everything else that makes up the South, good and bad. Of course, George Floyd was killed in Minneapolis; racial problems are not merely Southern problems. But the South needs to own our culpability in having enslaved a people based upon the color of their skin. I think it will be up to readers to determine if I’ve captured a “coherent southernness” or not. This was not my primary goal. My primary goal was to collect the best poems by contemporary writers whom I consider Southern.

This is really about the first anthology of southern poetry in a generation. What’s changed between Gracious and The Made Thing?

So much has changed: the internet, self-driving cars, a worldwide pandemic, climate change, a reality-TV president! Who could have imagined? But much has stayed the same. This anthology is more diverse, and that’s a reflection of our time. Racially, I think it’s pretty representative (percentage-wise) of the poets writing in the South. There’s more experimental poetry in this anthology, if that’s what we want to call it—more prose poems and more poems that play around with disjunction and fragmentation. There are a few other Southern anthologies that have come out between The Made Thing and Gracious, and poets should seek them out. But clearly, I think I had something to say about what Southern poetry is and does, so here it is.