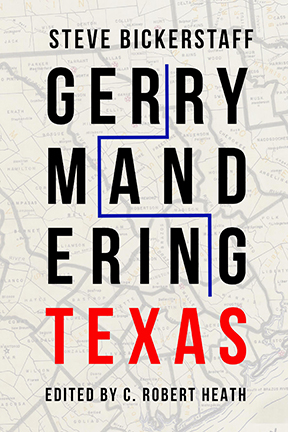 The 2021 Texas Legislature is in Session

After a very trying couple of months, during which the staff of TTUP routinely clicked “refresh” on election results and then were glued to news of insurrection, we remembered that the machinery of state politics is also getting underway. Our acquisitions editor Travis had a chat with Bob Heath, the editor of the newly released Gerrymandering Texas (authored by Steve Bickerstaff). Travis and Bob talked about the redistricting process, gerrymandering reforms, and the persistent fate of Texas Democrats.

Now that the census count has been stopped and we know who most of the 2021 legislators are going to be, can you tell us a bit about what happens next for 2021 redistricting? What does the process look like from here?

Because the Democratic effort to flip the House of Representatives failed, Republicans will remain in control of the process as they hold both houses of the legislature and the governor’s office. This means that it is unlikely there will be a deadlock as occurred in 2001 when Republicans controlled the Senate and the Democrats controlled the House. As a result, the Legislative Redistricting Board is unlikely to be convened unless the plan approved by the legislature is quickly overturned by the courts.

Because the redistricting plans no longer have to be precleared under Section 5 of the Voting Rights Act, the legislature will have fewer constraints. I think this may result in minority districts becoming more packed—i.e., more heavily minority—as this tends to concentrate likely Democratic voters in a few districts and makes it easier to draw Republican districts. Of course, any plan will still be subject to Section 2 of the Voting Rights Act, and post-session litigation over whatever the legislature approves is almost inevitable.

Finally, the Trump administration is having the Census Bureau prepare block-level data on citizen-voting-age population by combining administrative records that reflect citizenship with census responses. It’s not clear yet how accurate that data will be, or, with the change in administrations, if it will eventually be released. If it is available, there could be a push to use it, rather than total population, as the metric to use to determine if districts are in population balance. If it is used, it may reduce the number of Hispanic-majority districts that can be drawn.

A long, bruising election is over. Did you follow any of the gerrymandering reforms that were ballot initiatives in a few states? Virginia voters approved the formation of a redistricting commission, half of whom will be lawmakers and the other half laypeople, split equally among Republicans and Democrats (with deadlock to be broken by the state Supreme Court). This seems like a half-measure–do you think it’s likely to find any success?

I think we will have to wait to see how the Virginia plan works. It has similarities to the plan former Texas State Senator Jeff Wentworth pushed. His plan would have had a commission with equal numbers of Republicans and Democrats in the expectation that any ultimately approved plan would have to be a compromise. That was never adopted, and it is unlikely that Texas will give up its redistricting function so long as one party is in control of the process. As I understand, the Virginia proposal was initially approved to go to the voters when the state was in the midst of transforming from a Republican-controlled legislature to one controlled by Democrats. That sort of transition is probably the situation that would need to occur for a commission to be seriously considered in Texas.

Well, the annual Texas prediction of a blue wave had its usual results. At the time of writing, Republican Representative Dade Phelan claims he has the votes to become House Speaker. It seems like Democrats have lost any hope of having say over map drawing. So is it to be another 10 years of wandering in the wilderness for Texas Dems?

That is very likely. Although the Democrats came closer to carrying the state, they fell short both in the statewide race for president and in the district races for Congress and the legislature. Republicans will draw the lines to maximize the number of Republican districts just as the Democrats drew the lines to maximize the number of Democratic districts when they were in control thirty years ago.

While the districts emerging from the session will undoubtedly favor Republicans, Democrats may have some hope of improving their position as the decade goes forward. If the Republicans draw districts that are very strong, safe Republican districts, that limits the ability to maximize the number of GOP districts.  Rather, they will want to draw districts where Republicans are in the majority but not in an overwhelming majority. Those are the type of districts that, over the next ten years, could result in some districts flipping as the demographics of a district changes due to population growth.

Finally, what do you think readers can get out of Steve’s book at a time of political upheaval like this one?

Redistricting and gerrymandering have a huge impact on how the state will be governed over the next decade. Steve’s book gives the historical context and sets out what each political party is likely to do in 2021. If someone wants to understand this very important process, this book is the place to start.