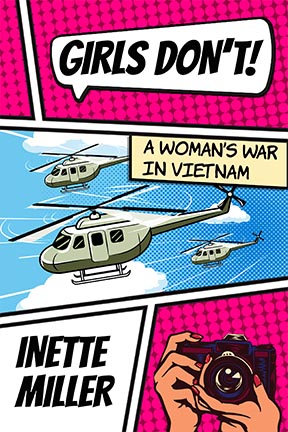 Inette Miller is the author of TTUP’s new book Girl’s Don’t. Girl’s Don’t is the story of what happens when a twenty-three-year-old feminist makes her way into the land of machismo. This is a war story, a love story, and an open-hearted confessional within the burgeoning women’s movement, chronicling its demands and its rewards.

Read about Inette’s experience writing about the Vietnam way and her thoughts on feminism and the #metoo movement below.

You’ve been sitting on this story for a while now. What made you wait to tell it and what made this the right time to do it?

For years, I thought everything describing the Vietnam War correspondent experience had been written—that I had nothing new to add to my colleagues’ excellent accounts.

About twenty years ago, I made a stab at it. I’d heard a nameless voice on NPR saying: “Wherever you were, whoever you are—if you were a certain age during the Vietnam War, you carry with you a feeling of failure.” That disembodied voice pushed me to try. I wrote a version of this book (called something ludicrously different) and then I joined the chorus in agreeing that it failed to do the trick.

But times do change perspective, don’t they? Again, I was prodded by a voice. This time it was the Vietnam War correspondent, Elizabeth Becker, in the New York Times. She wrote: “News organizations weren’t sending women to cover the most important story of our generation. Instead, we had to find our own way to the battle zone. In Vietnam, we became the bridge between two eras: the pioneers of World War II and the women of the modern era, who by the 1991 Gulf War took it for granted that they could cover wars.”

I was off and running. The new title, Girls Don’t, bellowed itself. The #MeToo movement assured me that, now, there was an audience.

While Girls Don’t is a war story, a love story, and a coming-of-age story, it’s also a story of women in the workplace. Can you talk a bit about the difference between the newsrooms in Vietnam versus your experience stateside? Where were gendered expectations most felt?

Stateside actually felt more restricted. After 14 months in Vietnam, I returned to a newsroom where I was one of only two women seated among 100 men in the news department. Off to the side, behind a white picket fence (and I am not making this up) was the Women’s Department.

I replaced a man as medical / science reporter in a very good town for medical reporting. I was prolific. At some point, my City Editor placed one of my stories in the Women’s section—“to give your story more space”—and I threatened to quit. It didn’t happen again.

Oddly, in the heart of the macho world—the Vietnam War—I was freer. In many ways, the War was an opening for the ambitious—it was there for the taking. Once I was credentialed, my colleagues—though perhaps incorrigible chauvinists (and I smile here)—were almost all collegial. The fact that I was married to an American soldier, I suspect, erased potential sexual tension.

American military officers—the higher the rank, the more recalcitrant—consistently refused me interviews in favor of my male colleagues. But the grunts—oh, those sweet boys—I was their favored sister, and they were thrilled to open up to an English-speaking American woman.

With the advent of #MeToo, we are finally reading about stories that before we simply ignored because they didn’t feel like news or because they threatened powerful men. What are some of the kinds of stories you often saw ignored when you were in Vietnam or thereafter?

When American journalism laser-focused on military engagement and its political consequence—overwhelmingly, our shared obsession—so much went unseen and unreported.

My colleagues could frequent prostitutes with absolutely no awareness of the unimaginable corruption that transported these teenaged girls from farm to forcibly drug-addicted whores.

We failed to understand (or care about) the culture’s ancestral values and land-centered communities. We completely missed the shame our occupation inflicted on a proud people.

Lost in the American news accounts was the crippling pain, degradation and death that our national political choices wreaked on a people who remained largely absent from American minds or consciences.

You write about a hierarchy within journalism of the era—with hard news at the top of the totem pole. At the bottom is softer first-person essays. What are the advantages to writing a very first-person Vietnam story like this one?

Oh yes, the lines were drawn. Prestige levels were assigned like so. Covering the War was number one; covering politics came next. Hard news, always highly valued; feature stories were still the providence of the Women’s Departments—dismissed as Society events.

But there was absolutely no other way for me to tell this
story. A well-written memoir is indistinguishable from a well-written novel— if successful, each take you into authentic emotional experience. Each delivers a protagonist who lives a truth the reader recognizes as his or her own—even when it’s embedded in the most unlikely of places, like a War in Vietnam.

Distance did not serve the purpose of truth in this dual-
level story: the War for the soul of two nations; the war for gender equality. The first-person voice in this book extinguishes that distance, exposes the deceptions, and puts their emotional fodder in our faces.